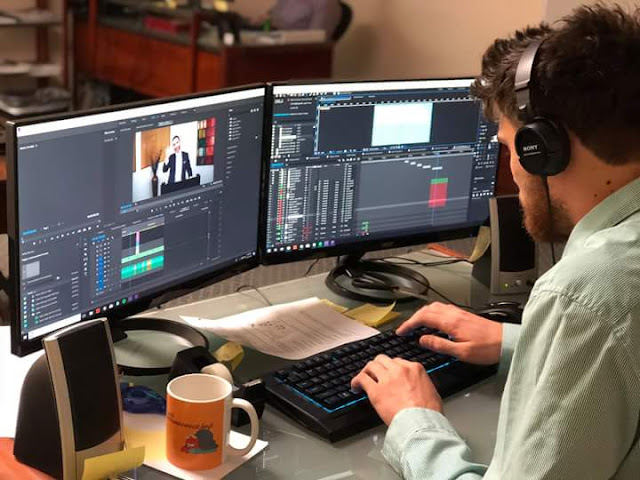 Here are 9 of the most widely used vlog video editing applications for YouTubers. Some of the applications/software below are free applications that you can use without having to buy a license.

Adobe Premiere is a vlog video editing application that may be used by all professional YouTubers. Adobe Premiere is very efficient and is used by many people who usually produce films, short videos and other types of videos including vlogs.

All the features needed to edit vlogs into an amazing video are here. Creating YouTube videos is one of the functions of Adobe Premier:
Free Trial

If Adobe Premier gives you the ease of changing footage or video files from the camera used when vlogging, Adobe After Effect is a video editing application suitable for compositing.

For example, your vlog wants to add other objects from different files, or you want to add opening text at the beginning of your vlog video, then Adobe After Effect is the right application.

Some YouTubers use this application to create animations, YouTube video intros, and other compositing processes.
Free Trial

If Adobe products are expensive for your pocket, then Sony Vegas Pro is the right choice. This application is basically the same as Adobe Premier which is used for assembling and editing video clips also you can do basic color correction and color grading using this application.
Free Trial

As Apple said, iMovie is a video editing application that turns ordinary videos into professional films. With the iMovie application, you can easily make your vlog into Hollywood-style video.
Free Trial

Filmora is one of the most widely used video editing applications for beginners. Filmora offers a user interface that is very easy to use and lightweight when editing video.

In the Filmora application, you will be presented with various intro templates, opening text, lower third titles, and many others. Filmora has the same convenience as to when using Windows Movie Maker but has more and more modern features.

For those of you who don't want to be bothered and don't like the hassle of editing videos, then Filmora is the right choice.
Download

DaVinci Resolve already has all the features needed in the video editing process so this application has been used by home editors to the Hollywood film production kitchen!
Download

If you don't like Filmora, you can use WeVideo which also offers easy-to-use video editing features without having to understand video editing.
Download

Some vloggers usually use YouTube Editor to enter intro music to backlog vlogs. To use it all you have to do is just log in to YouTube and edit the video that was uploaded before.
Try


Those were some of the vlog video editing applications commonly used by YouTubers. All of the above applications can be used on a PC or laptop. If you prefer to edit videos via an Android smartphone, then We will make the article later.
SHARE
Computer How To Troubleshooting

Dottycat Don’t settle for something you do not enjoy, it is up to you to do better and create the life you want to live!